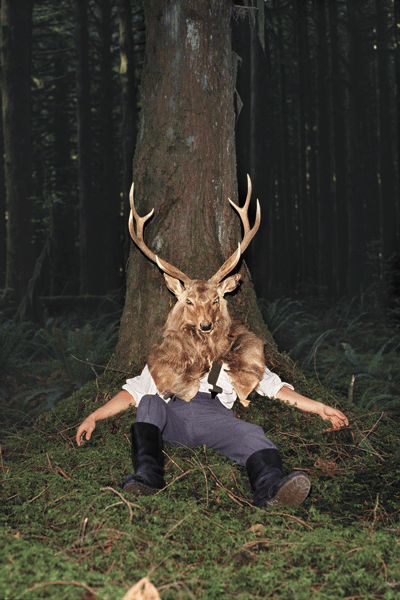 David Younge’s the damned in 3D

Notorious for wrestling a Camaro and drinking his entire body volume in water, Vancouver artist David Yonge recently turned his efforts towards the production of a 3D werewolf art video. The world premiere, and only Canadian date, of the film will be on Saturday, February 25th at Video In Studios at 1965 Main St, at 7:00PM, 9:00PM and Midnight.

Only: Who is the character you play in The Damned? At first I thought he was a writer, but when he puts the deer head on he’s more like an early 20th century performance artist.
David Yonge: I wanted to explore polar opposites in this project, the character is sort of an upper crust bourgeois writer and he slowly develops, or is re-connected to the primal instinct that he has buried over years of conditioning. He also has the delusion of grandeur that I like. There is a self-portrait of him in his house that is usually reserved for the wealthy, yet his place is smaller than a closet. I chose the time in history somewhat specifically because 1905 pre-dates performance art, so he’s the first performance artist without even realizing it.
Only: What was the process you went through to shoot this movie–practically on your own?
DY: I thought about getting an actor to play my role and then I could focus on the direction of the movie, but the whole point of the movie is so that I can explore these ideas first hand. I didn’t want someone else to perform the performance. Filmmaking isn’t always a collaborative effort. Sometimes I don’t work well with others.
Only: Did you have a particular 3D experience that inspired you to make The Damned using this format?
DY: Every 3D experience is inspiring! I can’t get enough, if it’s done right. There are secret societies about 3D that I have come across. I never wanted to be one of those tech types that goes on and on at parties about 3D, but here I am.
Only: Do you find working in film, with multiple takes, editing, etc., has provided you with work that is closer to what you originally envisioned as opposed to a live performance?
DY: I’ve never considered myself as a purist to performance art; I have no loyalty to any medium. This idea started with performance art trappings, the slow recess into an animal. I didn’t know how to perform that, so a lot of it was internal. I like filmmaking for so many reasons, moving an idea through and past an art audience and into a larger grasp of a cinema audience is interesting. I used the banner of film as an access point for an audience that may not be interested in performance art. I felt, as the character in it, that I was acting 90% of the time. I can be a bit obsessive about details that no one notices. For example, I’d let the cameras role, walk into the room and close the door, “OK, let’s try that again, would I really close the door like that? Hmmm, wait, if I’m a wealthy character then I should close the door with conviction?” However, the final scene in the cabin where I am fully entrenched into the elk head is about as much of a performance art piece as a live piece would be. It was 3AM, I’d wake up, press record on the cameras, wait for 20 minutes, roll around on the floor for a while, forget who I was and then slip into the elk head.
Only: Is one more satisfying than the other?
DY: Every medium serves its purpose, but I think the next project has got to be a feature length performance art movie.

For more information on The Damned and to give suggestions on his upcoming Bruce Willis project check out www.davidyonge.com.