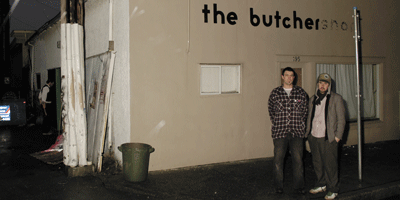 The Butchershop closes down

Only: So the Butchershop is done?
Jesse: The Butchershop as we know it at 196 26th Ave is closed effective Tuesday the 31st. The Butchershop Collective is going to be moving on to other things. It may not be the same manifestation that it has been. It may not be the same amount of people. It may be two or three different collectives. We’re not sure yet. We’re gonna take some time off, go over the considerations that made us leave that space.
Only: Do you wanna talk about that? I heard there were some problems with regulations or something.
Jesse: Ok Yeah. Essentially we had grown too popular and we had been throwing the kind of shows that are not legally allowed to be happening in that space that we occupied. It’s a mix between city regulations and us outgrowing the space. But we had grown attached to that space and it’s kinda hard to leave now that we’re being forced to leave rather than leaving willingly.
Only: What did it come down to? What forced the
issue?
Jesse: I think it was our third noise complaint from the city.
Salazaar: After the noise complaints they put restrictions on the kind of shows we could do and then we couldn’t afford to keep the space, it became a repeat of scrounging for money before the end of the month.
Jesse: We weren’t able to do the shows we wanted to do: we weren’t allowed to have any amplified music, no
public assembly (meaning not more than double digits of people within the space. They were basically making us go back to our zoning restriction to be a retail art dealer.
Only: Wow, I didn’t know the Butchershop was ever in the business of selling art. Is there something wrong with this city that we keep losing our best venues for alternative culture?
Jesse: People focus on Vancouver being draconian – and lets face it, if all the old spaces this city has started were still around, we would be outshining Montreal by a mile – I’ve come to think that perhaps Vancouver is too diy for its own good. I know that we walked into this without knowing how to do what we were doing, how to ask for help, and how to use the help we eventually got. The level of camaraderie is there when different arc’s or collectives share a beer, but the sober Monday mornings, everyone is back to their alienated selves. There are too many separate groups all trying to service the creative communities, and they don’t know about each other. There are a dozen different galleries with the same mandate. Our last swarm show tried to tackle just this problem, but it didn’t work. We weren’t professional enough to satisfactorily answer the questions, or even to ask them properly. I don’t know if the solution lies on coalition politics, but we’ve been thinking about hosting a conference about the state of the creative cultures in Van, inviting all the arc’s, collectives, spaces, creative producers, artists, indie rags & mags.â€‰.â€‰.