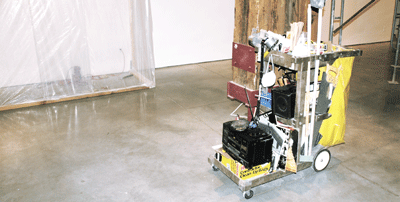 In their last year of art school Gareth Moore and Christian Kliegel were running a renegade gallery out of their tiny allotted studio space at Emily Carr. The Fred and Jock Gallery, as they called it, gave them a space to curate some interesting shows and make a bit of money selling beer to other students and teachers at lunchtime. Now, less than two years later, Kate Rimmer has invited the two of them to curate a show for the 25th anniversary of the Charles H. Scott gallery.

Acting as artists first and curators second, Kliegel and Moore opted to do a hybridized curation project based on archived material and new works created specifically for the show. Inspired by the work of superstar curator Jens Hoffman who recently gave a talk in the city and to who was given brief tour of the show, Moore and Kliegel have taken the role of curator and blurred the lines.

Most of the work feels inspired by the Internet in that it provides the artists with access to eclectic associations, which they organize with all the rigour of a serious conspiracy theorist. Take for example the work Inception Island set up as a condensed volleyball court with a microphone on a stand and two lists written in felt pen on paper. The names read like opposing teams of iconic cultural figures. One team has the names of cultural figures who died in 1980 (this includes Jean Paul Sartre, Alfred Hitchcock, Jaques Lacan and Ian Curtis). This is the outgoing team. The other team is the incoming cultural figures who were born in 1980, including (Venus and Serena Williams, Jessica Simpson, Macaulay Culkin, and Curtis Grahauer).

Potentially problematic in this sort of art is that casual viewers are left to ascertain all these references on their own. The logic behind the references isn’t made explicit with ‘didactic panels’ (the name for those wall texts that you see when you go to bigger institutions like the Vancouver Art Gallery). Kliegel maintains that a lot of times you don’t need to know the different levels to the pieces to get some appreciation for them, and that art is not that interesting if it has didactic panels and he prefers the way that the experience can change as different layers of work become known.

The title of the exhibition is Dave Johnston, aware of the danger of eruption, contemplates a conversation he had with a friend twenty-five years ago. “I feel like we’ve exhausted the creative possibilities of this picnic table,” his friend said. “Yeah,” Dave replied and it will be open until December 11, 2005.