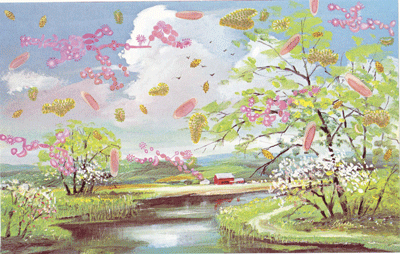 Only: How did you come by these images of landscape paintings?

Lisa Cinar: The book is called â€˜Painting the Four Seasonsâ€™ by Carl Stricker and is published by Walter Foster booksâ€”itâ€™s a â€˜how-to-paintâ€™ book on the subject of landscapes. I assume that it was published in the late 60s. Initially when I picked it up on an excursion to Value Village, I saw it just as a novelty item. I didnâ€™t buy it with the notion of using the landscape images for any artistic purposes.

Only: Why did you choose to use Carl Stricker’s landscapes exclusively?

LC: I like the idea of painting over the images but using the same guidelines that are set up in the book. Stricker says that he attempts â€œto cover some aspects of landscape painting that have been neglected, or touched on only briefly.â€ Using this statement as a starting point, I attempted to depict a neglected aspect invisible to the eye, in this case the pollution of our landscape. I was trying to follow Carl Strickerâ€™s instructions on how to paint the four seasons, but in this case I just happen to be painting over his landscapes instead of producing my own. I feel that I updated his images by doing this, but I do wonder if he would appreciate if he could see them this way.

Only: Had you thought of painting your own landscapes instead of using found images?

LC: At the time I was researching air pollutants because I wanted to paint canvases with images of found photographs of everyday people with these various pollutants painted on top. When I found this book and flipped through it looking at all these images of the â€˜idealâ€™ painted landscapes I thought of how there was already so much pollution at the time, but at the time, nobody was really thinking about it. Automatically I pictured images of the waste particles I had been researching floating over these supposedly perfect landscapes. I liked the idea of imposing the particles on top of the already existing images, just like pollution imposes itself on our very own landscape everyday.

Only: Where the source images for the microscopic pollutants hard to come by?

LC: Yes! The images for the actual waste particles were definitely hard to obtain! Most books on the subject only have images of smog, factories and mostly a bunch of boring graphs. I found that the more specific I could get with my searches on the internet, the more it helped to get access to the specific images for which I was looking. I think that it is quite strange that there are almost no visual depictions of these particles that we breathe in every. In a way it made it all the more exciting for me to search for them, and all the more meaningful for me to paint them.

Only: The paintings in Wasted Landscapes seem to be looking at the pollution of saccharine prettiness that the typical Sunday landscape painters have provided usâ€”using skills which with they have been provided by such books as this one by Carl Stricker.

LC: Yes, definitely. I like the whole baggage of this strange relationship to nature that we have that these landscape images bring with them. Because really the images arenâ€™t realistic renderings of nature, they are the usual pretty, bland landscapes that weâ€™ve all grown to hateâ€¦or love.

Only: Would you say that the work is stating the obvious, in which case pointing to our tendency to avoid dealing with pollution as a very serious issue?

LC: There is definitely some of that in there, but really I think that what I like about the images is that they make something real that is always there but just not visible. I like the idea of making things visible, drawing out our fears. When I start to think about how many pollutants are in our air I become pretty overwhelmed, and that is not even taking into consideration all the other major aspects of pollution that are happening simultaneously. It is calming for me to draw them out, to come to terms with it.

Only: In Wasted Landscapes, it appears that a certain thought or way of thinking is being provoked, something along the lines of picturing a kind of physical proof that we all know is there but choose to ignore.

LC: The paintings are meant to be suggesting this physical proof, yes. On the other hand I think that after looking at the paintings for some time, and once the viewer realizes that the shapes imposed over the landscapes are meant to be pollutant particles the images become strangely, sweetly normal and almost boring in a way. I wonder if this has to do with our inbuilt complacency when it comes to doomsday subjects such as air pollution, water pollution, global warming, etc. Because of the seriousness of the subject, and the â€˜avoid and ignoreâ€™ mentality that we tend to have when dealing with it, I decided to approach it in a different way as well. That is where the idea for the colouring book came from.

Only: The colouring book that you made for the show deals with the subject matter of the show but in a more direct way. Itâ€™s nice to have something that functions no only as an artistâ€™s statement for the works but serves a playful purpose as well.

LC: I wanted to share a little bit of information with people on what I had learned from my research on air pollutants and decided that in order to actually get someone to look at it for more than just a minute or so, it would have to be fun. In the colouring book you can colour in funny waste particle characters and learn about the seriousness of them at the same time. And letâ€™s not forget that it has stickers. Who wouldnâ€™t want stickers!?

Only: The colouring book brings up asthma as an outcome of our collective negligence towards air pollution. Having had asthma since childhood, I was wondering if there was a personal interest that you had invested in the cause and effect of this affliction.

LC: I had very bad asthma when I was little. I was living in Germany at the time and I was hospitalized several times for it, having to go in one of those oxygen tents. The worst time, my mom and I went to the hospital in the middle of the night because I couldnâ€™t breathe. My mother was really environmentally aware at the time and at one point we moved to Teneriffe (part of the Canary Islands located near the north-west coast of Africa) for 2 years because she believed that the air would be better for me there. She was right. I havenâ€™t had asthma since. In general I believe that asthma is one of those things for which only ourselves to thank. If we could learn to live in more environmentally conscious ways, it would not exist. People are driving their cars to the store down three blocks in gas guzzling cars and then wonder why their children are getting sick with asthma!

Only: Even though the paintings and the colouring book are dealing with similar subject matter, the watercolours on the Stricker landscapes are very happy and playful in their colour and composition, whereas there seems to be a bit of doom and gloom about the colouring book.

LC: The colouring book is definitely on the doom and gloom side of things. I had thought about editing certain parts out such as the end where the character dies of asthma, but then decided against it. I did this because I am simply sick of having people get upset over a cartoon character dying at the end of a colouring book due to a very probable, realistic and dangerous disease, while there are actual children dying of asthma and plenty of other diseases caused by pollution and people could care less, or, even worse, do care but donâ€™t do anything about it.

Only: Do you have a group of people in mind that would benefit more than others to read through the colouring book?

LC: I donâ€™t have a target audience in mind and I think that that is the good thing about approaching the subject on two different levels with both children and adults in mind. There is something there for everyone. You can give the colouring book to your children and they could learn something while they colour. Just read it through first and donâ€™t blame me if the ending is too scary for you. There are some parts in it that are too hard for children, there is no answer page and there are some things that could be seen as inappropriate for kids. I am still thinking about making an actually marketable and edited version specifically for children. This version was simply the one that I thought would best accompany the images in Wasted Landscapes, and hey, it was specifically made for the show.

Only: Would you consider the work itself to be politically directed, is there a specific interest that you have in drawing larger attention to air pollution?

LC: I have been thinking about environmental issues for some time now, and have come to the conclusion that it is almost impossible to make art that really makes a difference when it comes to large issues such as pollution. What can and does make a difference is peopleâ€”it is as simple as that. I would like to think that the images for Wasted Landscapes I have produced and the information contained in the colouring books will help set some people on the right path to find out more on the subject or to simply make someone more aware of the problem that exists. Either way, the more and the earlier people realize the precarious environmental situation we are currently in the better.

Wasted Landscapes opened at The Crying Room (157 E Cordova at Main St.) on September 9th and is on display from16th to the 18th (Friday to Sunday) from 12 to 5PM. Lisa Cinarâ€™s colouring books are available for $4 each, you can contact her at HYPERLINK “mailto:[email protected]” [email protected] for more info.