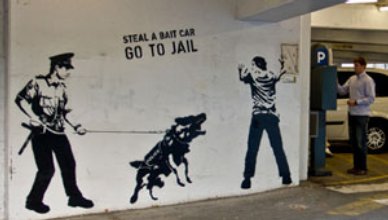 We missed this article a few months ago, but still feel it’s worth noting because, well…

As part of their anti-car-theft programme, Vancouver police have hired a stencilist to spray paint police-approved messages on the walls of car parks throughout the city.

This is interesting because the city has devoted an entire department to eradicating graffiti from the walls of private buildings, even if said graffiti exists with the owner’s permission. Yet, the art connoisseurs at the police department obviously side with the spray paint artists.

Says Wasserman + Partners, the agency that created the campaign: “We wanted it to look very authentic… We worked with the police department to come up with scenarios that would resonate with car thieves. All the situations we presented were based on actual stats. For example, car thieves are actually afraid of dogs.”