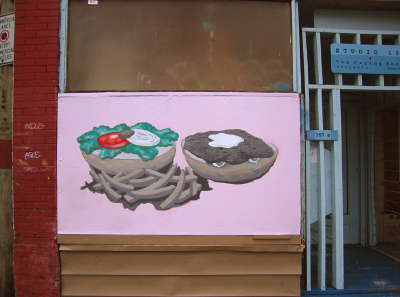 For those unfamiliar with Vic’s CafÃ©, it is a breakfast-all-day greasy spoon located on the corner of Main and Cordova. Those familiar with Vic’s will know of its hand-painted sign advertising a grey hamburger with full colour lettuce and tomato. Over the next month, courtesy of local artist Andrea Nunes, this burger will be reflected across the street on the mural project of the Crying Room.

Was there a particular moment of inspiration that called on you to make tribute to the notorious, grey burger?

That burger has always affected me in a certain way… I’ve always felt myself extending empathy towards it. The style it’s painted in is so proud, but then it’s got these kind of pathetic elements, like the discolouration and it’s alone on this large white background, open-faced–it’s actually a very vulnerable image.

I think of the piece as an imagined moment–the appearance of a soul mate, or a reunion. I thought it would be funny to reach out to the burger in some way.

Having two grey burgers across the street from one another at a busy intersection definitely produces a double-take effect.

Hopefully nothing that would cause an accident. I was hoping for it to have an uncanny effect for people who have seen the Vic’s burger again and again but maybe had their minds on other things. There’s a bus stop below the Vic’s sign and I thought it would be funny for the people waiting there to have this other burger seemingly gazing at them.

Were you conscious of your reference to a building that is a regular character on Da Vinci’s Inquest?

I was kind of tickled about it, because I love that show. On the show, the cops usually go to the Ovaltine, but Vic’s is Da Vinci’s hang-out–people meet him to have discreet discussions in there, and more often than not it gets heated and he ends up slamming his way out and not finishing his meal.

Did this connection to a television program, that at the same time documents and dramatizes the Downtown Eastside, inform the concept of the work?

Not so much the connection to the show, but I did give a lot of thought to the neighbourhood when I was invited to do the project. I fretted about different ideas and what meanings they would have in that location until I realized I was taking myself way to seriously.

I wanted to do something that only made sense in that location. In the end, I narrowed my frame of reference down to a half-block.

The work is very auspicious in its site-specificity.

I guess I wanted to do something that would serve as a kind of inside joke for anyone who frequents that block.

The title of the work is, I’ve been looking for you EVERYWHERE! Does the title hint at the content in some way, is it meant to be arbitrary?

The title is meant to be what the burger is thinking; I have given that title to a lot of things. It has a lot of different intonations, and a sort-of comic melodrama. No matter what my work looks like or how it functions, it always seems to be about longing, and that title fits a lot of my pieces.

The title ends up functioning as a loose concept for your whole practice.

I would say so. When I was a kid I was confused about the whole “imaginary friend” phenomenon and thought the imaginary friend was supposed to be like a hallucinatory visitation, not something I was supposed to generate out of my own mind. So I spent all this time waiting to find or be found by someone who never showed up.

Not to say my work is about my miserable childhood, but I notice that in a lot of it I somehow find myself imagining comic versions of that moment that never happened. For example, my art school grad project (which was named I’ve been looking for you EVERYWHERE!) was a computer game that worked with randomized elements to create a unique monster for each user, with a special message meant only for them. I also showed a piece at the Xeno Gallery that was a photograph of a mountain scene that I’d digitally superimposed a drawing of a sort-of cat-mountain character into–it was also called I’ve been looking for you EVERYWHERE.

What do the eyes mean?

Putting eyes on things without eyes is the most universally hilarious things I can think of. I guess it is like a really simple joke, but there is also something more serious about it to me. It is like giving it a soul or making it into something that reflects your own soul. I have a really hard time throwing away objects that have faces. I feel really superstitious about it.

Have you ever eaten at Vic’s or know anyone who has?

Andrea Nunes’ I’ve been looking for you EVERYWHERE! will be on the Crying Room mural project at 157 East Cordova for the next month.