Be True To Your School: Megan Anderson 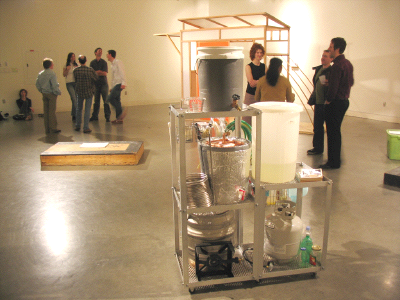 ??Where do your specific interests lie in the concept and execution of your work? ??

My work explores the mechanics of culture in a hands-on sense. Iâ€™m interested in what grassroots activities, systems of production, and everyday ritual generate. There is a social element to my work that I think is important; that plays out in the research and development of my projects but is conveyed in a broader context to people who see or experience my work.

I donâ€™t at this point provide a whole lot of background information in my installations: I am more interested in the non-specific residual energy that seems to build in work that contains a great deal of investment but little in the way of didactic information. The work becomes a kind of proposition where there is a kind of open-endedness that I find interesting.

For example, the work Iâ€™ve done relating to home-brewing is the result of about 2 years of research and development, most of which came from direct interaction with the home-brewing communities in Vancouver, Victoria, and online, also I informally apprenticed with an expert brewer (my dad). I taught myself how to weld aluminum to build my own rig. People sampled the beer I made, every step of the way, culminating in a limited edition run of sandblasted stubbies I bottled for the opening and made available for sampling. That has led to word-of-mouth sales and trades, which demonstrates the alternative economy present within any social infrastructure. Itâ€™s an important part of the project, to understand and participate in do-it-yourself activities and systems of production and dissemination. But in terms of documentation or information, I include very little evidence of these social transactions so the work in the gallery still rides a kind of line between sculpture and function.

??Having recently completed your MFA at UVIC, how has your work evolved over the course of your studies? ??

I have managed to clarify some of my interests and what is important to me, and this is reflected in the work. I have a background in traditional sculpture, but over the course of the last few years my practice has really diversified. In the last year I became interested in architecture as an alternative social practice, driving me to do a lot of research and design and realize some of my ideas. It has become important for me to consider applications for my work beyond the gallery. My practice could quite happily include work as an artist in a progressive architectural firm, or starting my own micro-micro brewery. I guess for me the gallery is a place of specialized contemplationâ€”a launch pad.

??How was the Productions Studio series instigated? ??

We (the 10 UVIC MFA students) were talking loosely about showing as a group in Vancouver, showcasing our work collectively to a broader audience. We had had a group show the previous year at an artist-run centre in Seattle, Soil, which was a great experience. Lucy Pullen (an artist and faculty member in the department) was really supportive of the project, and when we were kicking around ideas for various venues for the show, she suggested we contact a friend of hers who has a really great spaceâ€”that was Brad at Production Studio. He was into hosting the project and also the idea of a series of events, which developed into 2 & 3 person shows. Lucy curated the series, paired up artists to show together and has been writing an essay for each show.

It has been quite an ambitious project, given the monetary costs and amount of time required but we are happy with how itâ€™s turned outâ€”it has been a lot of fun and the work looks great. We are lucky in that it is a really good group of people in the program and everyone has brought a lot to the project.

The Index Project website is part of our promo strategy, in that our (screen-printed) posters, invites and press release have the website address and it is an easy way for people to preview the work. It is a showcase and an archive of the past shows as the Production Studio series progresses. As far as I know, the site will be up indefinitely and there is talk of continuing the project next year with new participants in the UVIC MFA program.

??Which of your works are being included in the Production Studio show? ??

I will be showing a modified version of a work I presented at my thesis show in May, taking into account the size of the space and some of my thoughts on the work since it was last presented. I am never positive of exactly what I will show until the actual installation and until I have a very clear idea of what is working and what is not. There is often some editing involved but so far the plan is to assemble the architectural piece Driftshack, as well as the Homebrew Unit and a small bookwork called Homebrewery. The book is a collection of images I downloaded from the Internet of home brewerâ€™s homemade rigs identified by name. I am also making some very rudimentary modular furniture out of a collection of risers, some of which I used in my last show.

The show runs over the weekend and I am considering brewing a batch of beer if I can work out the logistics. The space has a big roll up door that opens onto a small courtyard and it would be a great place to brew if the weather is good. I wanted to have some beer that people could sample, but the batch I was going to bottle turned out kind of funky and I had to dump it out. That was too bad, it was a coriander lager.

“I designed this piece to accommodate many individual and collective uses in a very small space that, through the use of modular decks, has the ability to expand. I was influenced by European (particularly Dutch) parasitic architecture and progressive building and urban planning practices. The Driftshack functions as a kind of prototype, but also has real-life applications I plan to instigate through and beyond the gallery. It is a work in progress, and will potentially function as a kiosk, studio, portable classroom, greenhouse, shelter, brewhouse, gallery and/or store. It can act as a model for low-cost, low-impact architecture on a micro level. It is a shed or backyard studio, an addition designed and built not by an architect but by an invested generalistâ€”an artist. “

Megan Andersonâ€™s work paired with the work of Mark Neufeld will be at the Production Studio, located at 870 East Cordova, and opens June 17th at 8:00PM and runs Friday to Sunday 12 to 5PM. Past shows can be found at Production Studio To see all of this yearâ€™s UVIC MFA graduates visit Index Project.