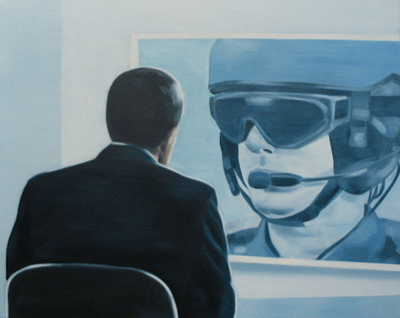 *What was your inspiration choosing to base a series of paintings around an unrealized film? *

I have always been fascinated with pre-production elements from films, things like early concept drawings and paintings, models and set maquettes. I like the idea of going back to before the film was made, and looking at it from such an early stage–especially finding elements that were never used that might have taken the film in a different direction. Before the realized film ruined them, there is so much promise in these early concepts.

I wanted to give myself a project that didn’t have a fixed end point, something I could work on continuously without really seeking a resolution; I wanted to allow myself the room for working with different mediums. I want to keep adding to the work over time and see what happens and have it remain as unresolved as possible.

*Are there any unrealized films that you personally wish would have been made, for example the Alejandro Jodorowsky or Ridley Scott versions of Dune–are some films just better off left at the starting gate? *

When I first heard about those films and others, like Orson Welles’ unrealized Heart of Darkness, I immediately wished they had been completed, but I think in the end these films are more interesting as incomplete projects–pure concepts. I wish that Steven Spielberg had never bothered with Stanley Kubrick’s A.I., a film that should have remained unmade, but we can always speculate as to what the film would have been if Kubrick had made it as originally intended. So in a way it still remains unrealized.

How did you come to choose to work in the specific genre of science fiction? Are there any sci-fi films that stand out as a specific reference point or any that you may have inadvertently been influenced by?

Well, the project didn’t start out as sci-fi right away; it could have gone another way. I wanted to point to things that do not exist in our everyday lives, to show something a little more unfamiliar or fantastic yet still plausible. Stanley Kubrick’s 2001: A Space Odyssey became a reference point the further I got into the project. I remember almost 15 years ago going to a screening of 2001 at the Park Theatre, the reels had been mixed up and we had to watch the movie in this strange, random order. I had seen the film before but I still wasn’t sure whether or not there was something wrong with the sequence of events, yet it still made sense. So it became a different film, the lost version of 2001.

Just about everyone has a different idea of what 2001 is about, or at least what actually happens in the film. It is a film based in fantasy but grounded in realistic concepts, probably the first film to treat the material seriously. The film was always there because it defines that part of the science fiction genre for me. It avoids almost completely any expository scenes and becomes this really subjective experience, which is similar to what I wanted to achieve.

In the creation of the series were there specific references that you were making consciously or is it completely original?

I was inspired by artists such as Ken Adam, who has designed a lot of James Bond sets, and Ralph Mcquarrie and Joe Johnston, two illustrators from the original Star Wars films. I wanted the look to be very clean and white as opposed to the scummy future of a film like Blade Runner??–more along the lines of George Lucas’ ??THX-1138. I wanted to achieve the feel of a certain type of film set, whether it was a James Bond villain’s headquarters or the war room from Dr. Strangelove. I had to borrow elements that would fit the concept, so in the end nothing is completely original.

The images range from what appear to be painted film stills to illustrations for characters and sets. How did you choose which images to represent this non-existent film–did you have a rough idea of a story before hand?

I wanted to stay as far away from an actual screenplay as I could, the less I knew about it the better. I was using a lot of found images that actually have their own narrative already–I just altered them to fit the look of the others.

Usually in sci-fi films, what appears to be a spotless Utopia is actually representing something oppressive or fascist, something ugly hidden beneath the surface of cleanliness. In this case you could use THX-1138 as an example, or the appearance of calm and order in 2001: A Space Odyssey before HAL-9000 goes mental. Was there a specific reason you chose this ‘clean’ aesthetic for your unrealized film?

There are definitely oppressive elements found in the work and I was using and altering found images of riot police and modern infantry to imply this oppression. That helped to inform the aesthetic, but I had wanted to keep things very white and minimal to suggest something incomplete or a space where the viewer could project his or her own ideas.

*In genre films–in this case science fiction–new films are constantly building upon what has come before, playing off the audiences’ expectations and past movie experiences. Along these lines, do you see yourself working with film memory? *

I suppose that I am trying to exploit some of the associations that people will naturally have with the work, just as I could not avoid certain references once I had started–they just appeared unexpectedly. After finishing one painting I noticed that what I thought was something I had come up with from scratch was very similar to the cover of a book I had lying around my studio.

The viewer’s memory in relation to film should fill in the gaps left open in the work, as it was my own film memory that influenced a lot of the subject matter in the first place. Film memory is usually associated to lived experience and personal memory. In this situation the work is far removed from the everyday and already associates itself with film. While it does exist in the work, there is less of a crossover between the lived experience and the film memory.

Angus Ferguson is in the Project Room of the Douglas Udell Gallery until June 11, 2005. His images can be viewed on-line at www.douglasudellgallery.com.