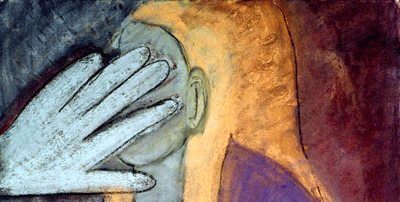 Art, as a therapeutic mechanism for the expression/treatment of a restlessly churning mind, is a powerful thing, but such works can have an equally powerful presence apart from their medical history, simply as works of art but saturated with the process that initiated them. Gallery Gachet, named after Vincent Van Gogh’s friend and doctor, is a collective of twenty-five visual artists dealing with issues of mental health, the only organisation of its kind in Canada. As part of Asian heritage Month the gallery is currently presenting, To Be a Part of Our Story, works by two Korean artists, Youngsin Lee and Julian Hahn, and in a smaller interim gallery just before the work spaces in the back, Go Away, with paintings by Riia Talve.

Youngsin Lee’s elegant clay busts and torsos are riddled with nooks, crannies and inviting passages hoarding stories and references, such as Refound Soul II, a narrow Buddha-like head in calm repose whose clasped hands form a cave. If you peer in you can faintly see another, more mysterious cave which can’t be entered except by imagination. Other pieces, such as Karma II, if slowly orbited, seem to tell a story of a dreamy-eyed woman caressing her neck, or perhaps it’s the hand of another; in bas relief we then find a tired-looking man rubbing the back of his own head as though in frustration; on the back of the piece there is a distinctly pensive woman we now see is holding the exhausted man to her chest. Lee’s stated purpose is dealing with the conflicts and social implications of being a Korean settling in Canada, but there are still other layers of serenity and melancholy.

Julian Hahn’s fusion of surrealism and the 13th C. Korean tradition of inscribing poetry, prose and philosophy on paintings is less successful. Hahn touches upon and references especially RenÃ© Magritte’s cloudy fields of blue, with his own satirical gags and a determination to create works easily accessible to as wide an audience as possible. The problem for me here is twofold: One, Hahn can actually paint. Not that technical accuracy is necessarily vital to a painting, but when it’s apparent to be the purpose, and even more so when it is the stated aim of the artist, then they can be held to that. Hell, Hahn can paint better than most of the surrealists during the day! The problem is that he doesn’t always make the effort. A painting, obviously, can be just about the surface, or make glib, populist statements, but there needs to be an investment of the artist into the material aspect of the work. Hahn can, but does so sporadically.

Riia Talve, however, is the most engrossing of the artists for me in the exhibition. Still a student at Emily Carr, Talve’s relative inexperience shows in her technique, but there is also an internal vision, heavily informed by Scandinavian Expressionism, especially Munch, as well as influences of Paul Klee, Odilon Redon, the Fauves, which suggest an interesting future. Riia deals with her Obsessive Compulsive Disorder through her paintings, apparently scrubbing her images directly from her brain onto the canvas, and while she says, if pressed, she would do the same again and again the exact same way; there can still be seen layers in the line making and application of colour suggesting a depth of process. There is also a bravery in her choices of colour, for example, combining subtle, subdued, even somewhat drearily greyed blues and greens with hot blazing pinks.