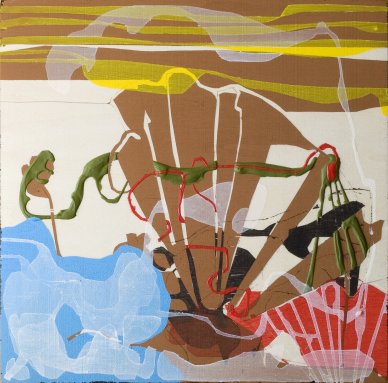 Neil painted an original cover for Only just as we stopped the print version of the magazine. Sadly we never got to use that painting, though it does hang proudly on our office wall. It’s the best cover you’ve never seen. His latest show features paintings, but also his latest passion — paint sculptures (made exclusively with paint.) They are also something you’ve never seen before.

ONLY: Your work is obviously abstract, but its hard not to look for literal shapes, like I saw a plate of spaghetti and a melted record player and an exploded swimming pool…

Neil: They are totally abstract, but then there’s things that will pop up. Sometimes it’s way too obvious. Like let’s say I accidentally paint a heart, when I see that I try to mask it up, or I used to try and mask it up, but now I can accept that it’s something, but that’s not my intention. It’s pretty much entirely intuitive.

ONLY: What’s the significance of Fort Garry?

N: Well I lived there, I went to school there and that’s where I started doing abstract painting, and so it has relevance. There’s Upper Fort Garry and then the neighborhood of Fort Garry — that’s where I first lived. It follows the Red River which is an important place. I don’t want to have paintings titled 1,2,3, so the names are personal, it just adds another element.

ONLY: How have your paintings changed?

N: They started two dimensional, and then became really thick, then an even heavier thickness and then I realised that’s it’s just not possible to keep putting paint right on the canvas. So lately I’ve been drying the paint separately and then I collage with that dried paint, and then wanting to push the collage further so turning it into sculpture. It’s a combination of collage, sculpture, drawing and even printmaking technique, but all with paint. 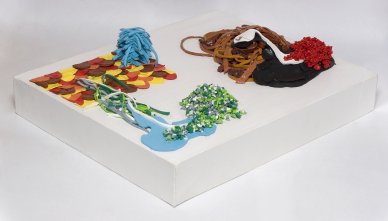 ONLY: Is it expensive because you use a lot of paint?

N: It’s not cheap, and with what I want to keep doing and elaborating on, its not going to get any cheaper. There’s a lot of fun in the process. There are times when I’m in my studio and I’m trying to push dried paint through a coffee grinder and it kinda clicks… I feel like I’m on the right track. Sometimes I question my sanity, but this is the one area where you can do that and it’s acceptable.

ONLY: I once saw you after you’d spent hours and hours bubble-wrapping these massive paintings that you had to ship to Winnipeg for a show, and then recently I saw some of your smaller pieces and wondered if perhaps you’d become more practical, but it doesn’t look like you have.

N: Make the work and figure it out later.

ONLY: Do you ever wish that you could drive?

N: Haha, yeah. Like I wish I had that big Purolator truck over there. I could just throw stuff in there and it wouldn’t be a problem.

ONLY: You’d probably just wind up filling the whole thing with paint and using it as a cast.

N: See, like those are the things that are possible. I’m at this point right now, and maybe I’m just overly optimistic, but I just don’t see an end to the possibilities and that’s really exciting. It can be frustrating too with what resources you have. If I could make a giant cube of dried paint, I would. It’s possible, I’d like to see it, I’d like to do that, but its just not possible right now.

ONLY: I have a hard time with mess, and despite all your experimenting, your stuff is beautiful.

N: I know my stuff is bold colour wise, there’s a lot going on. Sometimes I will use restraints to slow myself down, but I can’t see myself doing minimalist work any time soon.

ONLY: So you’re not done yet.

ONLY: Like another world that you can walk into?

Recreating Fort Garry is showing at the Jeffrey Boone Gallery (140 -1 E. Cordova) until November 4th, with a reception happening on Friday, October 12 from 5-8pm