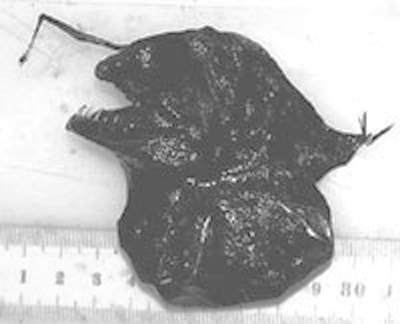 Mysterious and destitute spaces that exist beyond tangible human experience have long provided fertile allegorical ground for artists. Eleanor Morgan tackles the mythology of the deep sea — a near vacant, sunless, impenetrable place, and one of its most precarious inhabitants in her solo exhibition, The Dreamer Fish. Morgan’s fresh, uninhibited and youthful curiosity illuminates the interdisciplinary work that composes this show.
Immediately upon entering a darkened front room at the gallery we are confronted with a small yet disturbing sculptural replica of a dreamer fish filled with packing tape. Recovered off the coast of British Columbia a few years ago, the fish had reportedly mistaken the tape for food and swallowed it completely. Dreamer Fish, like Morgan’s previous work, Spider Drawing, from the group exhibition Hurry Slowly, explores our desire to connect with animals. Morgan feels that “we can only understand the animal as a metaphor for our own behavior, so there is a constant attempt and failure to connect.” The vulgarity of the dreamer fish’s appearance is momentarily overshadowed by the realization that the role of the pest has shifted from sticky creature to human. Our role and responsibility in the delicate choreography of nature becomes apparent at this point and helps set the tone for the rest of the exhibit.

Because life is so scarce near the bottom of the ocean, fish need to be properly adapted to capture the limited stock of prey that swim their way. The Dreamer has a bioluminescent lure linked to a pole-like protrusion that extends from its forehead. The shape of the lures is highly detailed and helps scientists to identify a particular specimen. In capturing this phenomena Morgan has created thirty-two beautiful drawings, each rendering one variety of lure belonging to the various species of dreamer fish. Every drawing has been carefully etched into an MDF wood panel that was initially painted white with a black overlay. Her reductionist technique adds an unusual sense of depth and dimension. The free organic forms restricted to a dark square plane reiterate Morgan’s notion of a constant connection deficit.

When observing contemporary art, it is often extremely difficult to repress ones tactile sense. Morgan remedies this common frustration by including an interactive sculpture that offers the possibility to experience life as a dreamer fish. Essentially, the piece consists of a thin, wooden helmet suspended from the ceiling by rope. A pole and blinking, glow-in-the dark lure are attached, making the helmet cleverly reminiscent of a simulation one might find in a science museum. This intentionally pathetic object designed to make its inhabitants look “a bit like an idiot (or perhaps feel like an idiot)” repeats once again the idea of failed connection. Morgan muses, “we are just left with ourselves (alone) wearing a little light calling out.”

A six-minute documentary short completes the exhibition. The work features Ted Pietch, an eccentric character who waxes philosophic about the reproductive habits of the dreamer. Pietch holds the title of what I imagine can only belong to an exclusive coterie: Professor/ Curator of Fish.

Morgan’s work generates a rare form of emotional intimacy by exposing its viewer’s vulnerability towards failure. This show will pleasantly haunt your mind for weeks to come.

The Dreamer Fish runs until April 16th, 2005 at the Or Gallery