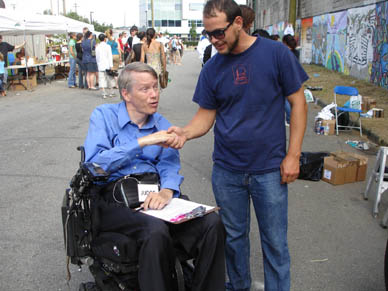 A painting mounted on the exterior wall of Little Mountain Studios was cut from its frame and stolen Saturday night. The nine foot by five foot painting, titled “Misty Morning Vietnam,” was by Alex Cieslik who had won $1000 for another painting he did at a city-sponsored mural contest on Industrial Avenue earlier that day. Worth about $1700, the painting was essentially an anti war piece and is expected to bring in a small fortune on the.. um.. local art black market. Key suspects include Sam Sullivan and other city officials, who are trying to recoup funds lost through the city’s public art programs.