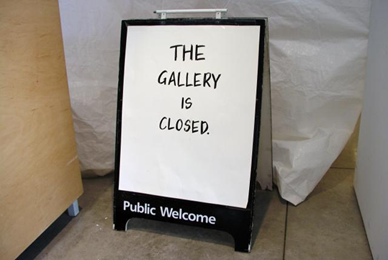 A new group show, Don’t Look Now, at the Charles H. Scott Gallery at Emily Carr, is brought to you by the people that every other show there is brought to you by—the ones building temporary walls, wiring projectors, blasting power sanders, and scowling “We’re closed!” when you come in to check out the gallery between shows.

They’re called “exhibition preparators.” The Vancouver art community being the size it is, many of these people spend half their time working such jobs in galleries around the city and the other half exhibiting their own work in them. Accordingly, the CHS’s regular team of preparators, Angus Ferguson, Ron Tran, Curtis Grahauer, Christy Nyiri, and Miguel da ConÃ§eicÃ£o, have produced a bunch of artwork about art work.