Recently I have suffered a loss of appetite, I have been feeling run down and tired and have generally been feeling poorly. This morning, in the shower I noticed clumps of my hair came out in the wash…any idea what’s wrong with me?
James

Dear You Should Probably Consult A Medical Expert,
What a downer. I don’t want to freak your shit or whatever, but I checked your symptoms on Web MD and I think you might have breast cancer or radiation poisoning or some kind of terrifying hybrid of the two. Please call someone who is legally allowed to wear a stethoscope and have them examine you.
Seriously.

Sometimes after a “night on the town” I get up in the middle of the night and I pee in the strangest places (closets, my brother’s bedroom, under my girlfriend’s kitchen table). The worst part is, I don’t remember ever doing it, I’m sleep-peeing. What’s up with that?

Dear That’s Not A Real Condition,

A lot of liars pass off their disturbing behaviour as a sleep disorder, but you’re not going to pee on my leg and tell me it’s raining. (See what I did there?) Last year a Toronto-area man claimed he suffered from a rare disorder called “sleep-murder” wherein he got up in the middle of the night, drove to his wife’s parents’ house, stabbed them to death, got back in his car, drove home, changed out of his bloody clothes, disposed of the evidence and went back to sleep. Wait, what? Exactly. What I’m trying to say is, stop going to bed so drunk that you are peeing on your girlfriend’s stuff.

It has been my experience both having been in and out of love at one time or another that the emotions of love and hate often exist at the same time. This is especially confusing and poignant during the act of coitus. There are times when I engage in the act motivated by pure love. Other times it is out of pure lust. However it is the times that I am with the one I love but currently hate that are the most difficult. My question is this; I’m thinking of getting two tattoos on my penis to represent this ongoing battle. On one side the word Hate, on the other, Love. Is this a good idea? Do you think that it will cause further problems with my current love or even future loves?

It’s human nature. Go for it! I’d like to think that if God didn’t want you to tattoo your penis, he wouldn’t have invented this guy: 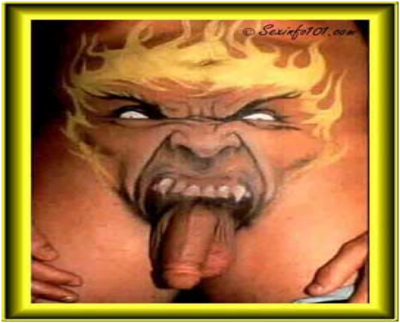