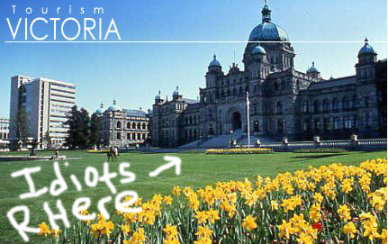 DUMB ASSES RUN OUR PROVINCE
The BC Legislative Assembly (“The Ledge”) is a huge gothic fortress where we keep the idiots that make our laws and count our tax money. The Ledge is built on a former Songhees Nation village site in Victoria, the provincial capital, and it’s filled with old-timey crap like some truly hideous murals from a couple generations ago showing the glorious domination of the white man over the naked savages. (Really!)

This week, the Ledge opened for the season with fresh evidence that our democratic leaders have shit for brains. After years of debate, the assembly voted last spring to get rid of those asinine paintings. But guess what? The murals are still there. So when a high-ranking First Nations leader visits the Ledge, as Tsawwassen Chief Kim Baird did Monday, the bare-breasted slave girls are covered with curtains. Maybe this is a way of showing respect, like hiding the porn mags under the bed when Mom comes to visit. But you can’t stop yourself from pulling them out again as soon as she leaves, can you?

Inside the Ledge, Kim Baird was all agog over the brand-new treaty the province negotiated with the Tsawwassen First Nation to settle their land claim. Outside, a couple hundred indigenous people were royally pissed off. And it wasn’t just the usual rants about treaties extinguishing aboriginal rights, etc, etc. No, this time Vancouver Island native groups are furious that a huge chunk of Gulf Islands fishing territory that has been theirs for thousands of years — and recognized by the Douglas Treaty in 1852 — is being handed over to the Tsawwassen First Nation. Whoops!

The new treaty — which still needs to be approved by the Ledge — pits neighbour against neighbour for the masters’ amusement, but the game is rigged. First Nations participating in the BC Treaty process win cash and prizes, and non-participating nations with overlapping claims lose big-time. The whole stupid mess will soon be winding through BC’s Supreme Court, where the Sencot’en Alliance filed suit against the province in September.

We tried to crash the Visitors Gallery, but it was full and a hundred steely-eyed Commissionaires were patrolling the outer perimeter. One turned us away brusquely as journalists wearing fresh-stamped ID badges skipped past the blue ropes and into the inner sanctum. “But we’re journalists, too!” we insisted. “No, you’re not,” he snorted. “Not unless you have Press Gallery credentials.”

Later, Premier Gordon Campbell scared the hell out of our friend Carolyn K while she was hanging around the side of the Ledge Monday. Gordo suddenly “came sneaking out the back door” with his two bodyguards, startling her. Carolyn notes he didn’t look drunk or coked up, but he is freakishly pale, like an albino or a cave-dwelling lizard. “He’s so white,” she shuddered. “They must put a ton of makeup on him to make him look human on TV. He’s incredibly creepy.”