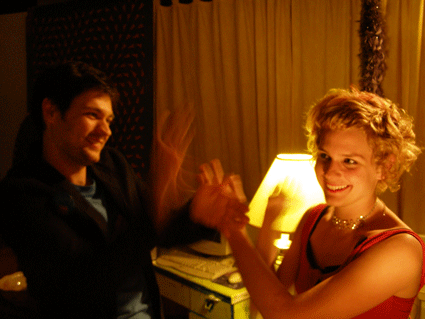 What? Vancouver’s not good enough?

The Winks aren’t moving to Montreal, they’re just going on tour and never coming home. After Tyr played a solo cello performance on the back patio of Cassius (that received a fucking noise complaint – waa!) we smoked a joint in the corner of the the Electric Internet Cafe. Though stoned, we had an decent conversation about Vancouver’s fragmented music scenes and The Winks six-year tenure in all of them.

ONLY: Can you reflect on your time playing as a band in Vancouver?

Todd: I kind of think of Vancouver as that scene in The Lion, The Witch, and The Wardrobe where there are all of those little ponds, where each pool is a different world. They are different portals. You go through this doorway and there is this world with a bunch of different little pools in a grass field. There are people wandering around and you have to be like, “Well which one is that?!”. It could be any of the different Narnia worlds. That’s what Vancouver is like. There are tons of portals.

ONLY: Where do you fit?

Todd: Well, we’ve always been on the outskirts of any sort of scene. We’ve kind of been in every scene a little bit, but never really enough to become centered around one group. I don’t think there’s a kind of show we haven’t played yet.
Tyr: And I can’t really see most bands fitting in to every scene. Like those jazz bands that we met in music school. They have their jazz gigs, and that’s their scene. Then there are The Doers, and you know what kind of show you are going to. But have you ever seen The Doers play at an old folks’ home (or Larry Campbell’s office)?
Todd: We’ve played VanDusen Botanical Gardens to a bunch of 80-year old Chinese people, and then we’ve played a show with Goatsblood. I think both Tyr and I, the way our music works, is we both never work out in other bands. I’ve tried being in rock bands but people always end up asking me to play something different.
Tyr: I think Vancouver is a really good place to experiment and grow. People don’t really care about anything that much so you can do whatever you want. When you go to other cities, people are a lot more perceptive and pay way more attention. You can kind of use Vancouver to practice because of that… Did you know my bow broke at Victory Square Block Party? I’ve been thinking about the symbolism of bows and how they are like wands. Like Harry Potter and the wands.

ONLY: And because you broke yours you wonder…

Tyr: What does it mean?!? I told my dad and he didn’t respond with, “Oh no! You broke your bow!” He was like (serious deadpan) “What does it mean? This is symbolism here. Something’s got to change.”
Todd: Then he grabbed a cup of salt and poured it on the counter. He put his head down and drew this giant pentagram on the table with his nose. And it was really hard to take him seriously because he still had this salt stuck to his nose, so we were kind of giggling. And he’s standing there pointing at it with this grimaced look on his face. Then he just turned around, ran to the bathroom, and slammed the door.