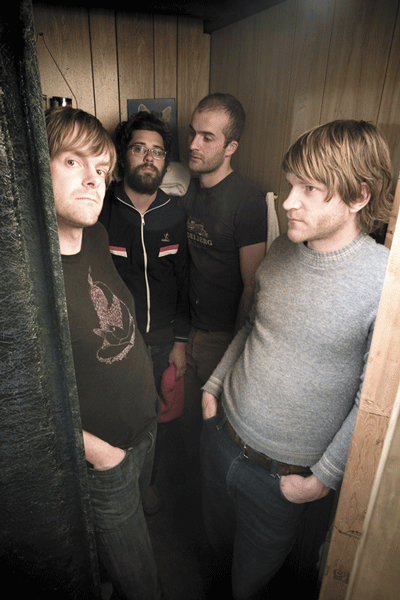 Even though all the guys in this band live about a ten-minute bike ride away from my house, they really wanted to do this interview via e-mail. The only other person who’s ever made us jump through that hoop was what’s-his-face from Brian Jonestown Massacre. He’s a total muppet, and I’d never trust him with my kids. I’d trust these guys though. It seems like they’ve got it all pretty figured out.

Only: Does it annoy you that White Whale is promoting you guys as a “post-rock” band? Or is that a classification that you feel suits you?

Precious Fathers: If the term “post-rock” or “shoegazer” sours anyone’s willingness to give our music a listen, then that sucks. Classification really only matters to people who haven’t heard the music in question. I mean, congratulations to the people who can communicate the spirit of a band they respect through references to genre. I know whenever I attempt to classify a band I love to someone who hasn’t heard them, it’s always “(insert a couple genres here),” followed by “but they’re good”.

Only: Your music is almost entirely instrumental. Do you feel that lyrics have lost their place in current rock music, aside from maybe acting as a 4th or 5th (or however many instruments you have plus one) instrument? Is there any room for lyrical substance in current music (excluding rap of course)?

PF: Writing songs without singing is a limitation we are very used to hanging out with. So much so that, for us, living without that limitation is too disorienting. Kind of like trying to feel good/right walking around without a bitch’s vest.

Only: Ideally, how would you like people to react to your live show? Like, is just standing around totally cool with you guys, or would you like to see a bit more movement or whatever?

PF: Ideally, we would like to see everyone in the audience cupping their ears towards the stage and closing their damp eyes, thinking to themselves for the first time since childhood, “I believe in Creation.”

Only: When songs are solely instrumental, how do you name them?

PF: Listening to the book of Revelation on tape backwards for forty days in our private homemade sweat lodge on Glen Mountain yields our most prized titles. The names create songs and never the opposite. I mean, “Upset Frankie Hustle”?!? You can’t beat that shit in any waking state.

Only: People dug you way more than The Album Leaf. Were those guys total pricks to you in that little backstage area at The Media Club?

PF: You’ve got the wrong idea entirely. Those who were in the backstage area can attest that the Album Leaf were most gentle and provisionary of servants, breaking out their sacred oils and anointing our heads. “Rise up”, Jimmy spoke, and… well, it was a private moment.

Only: What kind of parties are you into?

PF: Any party that doesn’t require pants, introductions, booze or eye contact will provide a descent time for our members. When granted a warm moment in a corner where we can reflect and confess thoughts, the party’s meaning would rise. Once risen, a story will unfold. A story that contains passion. A story with a bitchy vest.

Prescious Fathers play with Mice Parade and Tom Brosseau at The Media Club on Feb. 18, 2005