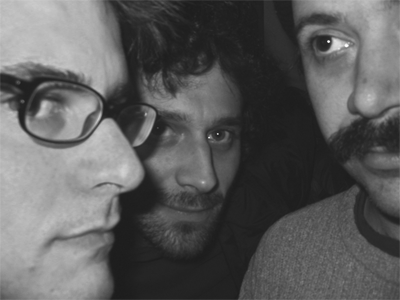 Interviews at exotic haunts. This, my friends, is the good life. Okay. Shane Phillipson toured Canada three times with his old band, Closed Captioned Radio. He lost a tooth in a mishap involving his face and the sudden stopping of a friend’s car. Shane Bristow, sporting a handlebar moustache I could hang off of, also terrorizes guitars and audiences in Unclean Weiner. Mark Karpinski was unavailable, but in his place was Shaunna, whose wonderfully colourful glasses lit up the Japanese restaraunt we ate at.

ONLY: I saw your (Shawn’s) performance on CBC Radio 3 (Shawn methodically destroyed his guitar with a power drill ), and I have heard reviews of past Closed Caption Radio shows, how reviewers described the show as ‘punishing’ and ‘blistering.’ What I concluded about Unclean Weiner and Closed Caption Radio is ‘spectacle.’ I saw the Robosexuals play two times, and I found that you guys let the music do the talking. Is that fair to say, or am I a jerk for saying that?
Shawn Bristow: I’m offended.
Shane Phillipson: I think in my more younger musical years, I wanted to have it be a powerful performance, and whatever it took to do that. Whereas now, I think that the music…..I’d like to stop talking now. [Laughs]
SB: For me, this is the first time I really spent time playing songs. So it’s kind of nice to sit back and play the instrument and not worry about presenting myself as a flurry of arms and screaming and smashed instruments.
ONLY: On that CBC clip, you tuned before destroying your guitar. Was that just for show? There’s a lot of thought that goes into your performances, so….
SB: I can’t play with an untuned guitar. That would be assinine. I’d look like a fool up there. [Laughs]
ONLY: You used to be flailing your arms around and now you’re letting websites and posters do the talking for you. How boring is that?
SB: I guess that’s just age catching up with us. I think it’s great. People are really identifying with the posters, thanks to Katie, and Steve Elliot from the Approach did our website. It’s kind of nice to have that stuff take focus and leave us a little more anonymous.
ONLY: Are you sad about what happened to the Piccadilly pub? Do you think it’s going through a dry patch?
SB: It’s the way Vancouver’s always been. There’s always been clubs that have come in and out. It just takes the right person to book the facility. It’ll come back, Steve Chase is booking it again.
ONLY: A lot of people complain about the Vancouver music scene. But it seems that most musicians are in 27,000 bands and they keep going, and they don’t leave Vancouver. Is that a testament to the musician or to Vancouver.
SP: I think it has a lot to do with the fact that Vancouver is an awesome city to live in, and it’s got a lot of amenities that other cities don’t have. I think currently the music scene in Vancouver is pretty strong, and I think there are a lot of really good bands that are getting attention.
ONLY: Why did Closed Caption Radio break up?
SP: It was because the drummer got flakey and everything fell apart after that.
ONLY: What does he do know?
SP: He’s fighting oil fires in Kuwait.
ONLY: The album; ten songs, six noise vignettes. Was it important to get the best of both sides of your band?
SB: We had a digital 8-track that we wanted to fool around and just experiment with.
ONLY: How did the CD release go?
SB: Really good. There was a lot of people there, and there was a lot of shows going on that night. It restored my faith in Vancouver.
ONLY: Woah, woah, woah, woah. You lost your faith in Vancouver.
SB: A little bit. I was kind of worried. There’s a lot of shows going on at the same time. I didn’t think there was enough people to fill the venues.
ONLY: I guess you were wrong.
SB: I’m eating crow. Sorry about that Vancouver.

Chrisariffic has a guest show set something or other on R3 and...

Only Three Years Until The Olympics!