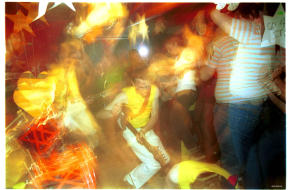 One of the hardest things about telephone interviews is trying to distinguish between people’s voices to attribute the quotes properly. Luckily, that doesn’t need to happen with Xbxrx. In fact, I’m not even sure how many members of the band I talked to. I love that someone’s unity can so conveniently cater to my laziness.

These guys are known for completely wild, barely tolerable live shows. They’ve been playing since they were literally kids. It made me feel kind of old talking to them.

ONLY: So, I have to refer to you guys as a collective and not individual members, right?

XBXRX: Yeah, that’d be best. We prefer all the answers to represent the band as a whole instead of the individual.

XB: Because that’s what the interview’s about–the band–not our own little personal riffs. We just want to make sure that everyone involved can be happy with it.

ONLY: Do you apply that principle to aspects of the band besides interviews?

XB: I think so. We have matching clothes when we play. We like to be more like a collective mind. Unified.

ONLY: What unifies you?

XB: When we started playing in the south–in Alabama–it was an extreme form of expression. It was like a positive outlet for negative energy. You could be mean, or violent, or destructive or self-destructive. We liked to use (the band) as a more positive outlet for us and other people. It’s really intense and it’s really extreme. And there are elements of negative feelings in it, but it’s expressed in a way that’s not self-destructive or hurtful to people.

ONLY: Aren’t you guys always injuring yourselves?

XB: Yeah, but all those are accidents. We don’t like hurting ourselves.

XB: I feel like there’s a price to pay for that extreme expression. There’s definitely a risk involved. It’s basically a very therapeutic ritual for us and everyone involved. Some sort of “scream therapy.” There’s so much of a high involved with it–an altered level of consciousness–we basically enter a state where we’re unaware of the risk of being injured. We physically feel that we can’t be injured at that time. Sometimes we do get injured, but the state that we enter blinds us to the fact that we can accidentally harm ourselves. When you’re in that state and you do get injured you don’t notice how bad it is until your adrenaline stops and then you’re like “Oh Fuck!”

ONLY: What did people think of you in Alabama?

XB: It was a very mixed reaction. We had a pretty big draw. But at the same time, half of the people that came to see us play–that found some purpose in coming–would turn around the next day and totally trash us. Unsupportive support. They would be verbally and mentally abusive to us, but also… um…

ONLY: …they paid to get into the shows.

ONLY: I guess the Bay Area is more supportive.

XB: Yeah. There are a lot more like-minded people here. There’s definitely more of a feeling that we’re part of something out here. The energy of when we were younger in the South–the frustration of our environment–still exists in a different element. You know, being older, being young adults. Like the health care problems here: seeing friends get really sick and you can’t really do anything because everyone’s poor. If you’re poor you don’t have health care and you barely have enough money to eat and pay the rent. The lower class is really ignored. It doesn’t exist to a lot of people. They don’t give a fuck about us or anything we care about. So we’re still reacting to the same people as we were–you know, republican, right wing Christian fundamentalists that got us into this position.

ONLY: Do you think that people pick up on that even though there aren’t really coherent lyrics?

XB: Well that’s why we included a song titles and lyrics and a lyric sheet with our new record. We’ve been trying to make it clear. We didn’t see a use in having lyrics and song titles before, but we figured now it might be the best thing to do. We had meetings about it. We felt like it would make it a stronger record. The music and the lyrics and the album art all really work together.

ONLY: Has there been some sort of continuity in the band throughout all the line-up changes?

XB: I think so. Obviously we’ve been through a lot of changes. It’s always been pretty consistent. There’s never been a change in the band where I felt like we were stepping backwards. I feel like we’ve been moving foreword with everything we’ve done. There’s been as much continuity as there can be over a seven-year period. When you look at someone when they’re 13 and then look at them when they’re 20 there’s definitely going to be differences. But the band is still the same person at heart.