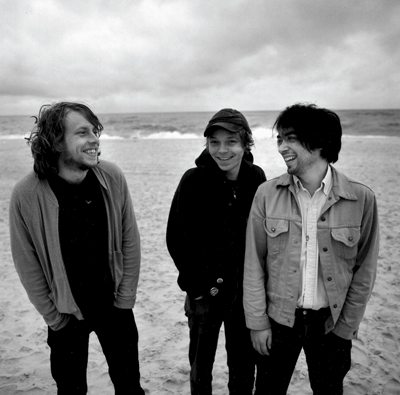 You probably don’t know this, but Tylenol puts out a zine called Ouch. This zine comes in really cool magazines like Tokion, but not Rolling Stone. And they aren’t covering all the bands on The OC soundtrack. They’re covering experimental, unappealing bands like Black Dice. What the fuck.

ONLY: So James Murphy thinks that you guys are in a weird way trying to make pop songs. Do you think that’s true, or is that just wishful thinking?

Bjorn: I can see why he’d say that. Obviously we’re not writing what you would consider traditional pop songs by any means, with conventional song structures. We don’t have lyrics, choruses, hooks. But we are writing songs that I think appeal to a pop aesthetic in many ways.

ONLY: When you write songs these days are you kinda thinking about what the remix is gonna sound like since you’re doing like five remixes a record?

Bjorn: Yeah. Not really. I mean, the songs are already written, and we don’t really write them with that in mind at all. And what we did with Smiling Off will probably be the last time we do that for a while. But we’re on DFA, so remixes are just part of what we do, you know? And also since Astralwerks is distributing us now too, the remixes fit in with their label quite a bit.

ONLY: Were you generally happy with all the remixes that came out for the last song, or were there a few where you hear them and you think they totally fucked it up?

Bjorn: No I was really impressed with the remixes for this record. It’s pretty fun, and I guess it’s interesting too to see different takes on the songs that we’ve come up with. On this one I thought the DFA remix was great. The Luomo one was good too.

ONLY: The Luomo one was awesome.

Bjorn: Yeah. Pretty much all of them. The ZZ Pot one.

ONLY: Do you guys listen to much rap music?

Bjorn: Yeah we listen to a lot of rap actually. I dig Quasimoto, the Sound Bombing Mixes, Old Wu-Tang. A lot of the new stuff that comes out too. Kanye.

ONLY: It’s pretty much the most innovative stuff that comes out, at least of what I guess is on the radio.

Bjorn: Yeah that’s true. Especially a lot of the dance hall type stuff that’s getting played on the radio in New York. Even like, I think every club we’ve been at in this tour has been playing that MIA record, which is pretty incredible. The beats get pretty out there, and that’s totally blowing up, so I think we can relate to the experimenting that goes on there in many ways. I feel lots of close ties to Hip-Hop.

ONLY: I read this interview you did in this zine called Ouch, and it’s a zine but it’s put out by Tylenol. Do you remember doing that?

Bjorn: Um, idunno. (He asks the other dudes in the car). Yeah I do kinda remember doing that.

ONLY: I just thought it was hilarious that they figured doing an interview with Black Dice would somehow get kids to buy more Tylenol.

Bjorn: Maybe they thought that people were gonna need some Tylenol after seeing our show? A Week Without jPod is a Good Week

Vancouver Fringe Festival 2005 Previews For Want of a Snappy Title