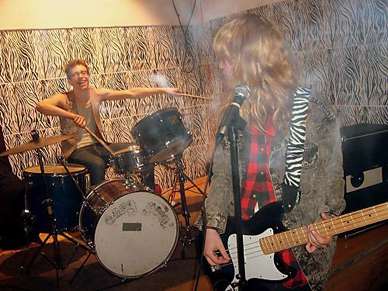 After much Internet creeping while trying to find time in our oh-so-busy schedules, Daniel and Andrea from Nu Sensae finally found some time to fuck shit up with me in the alley behind the Royal Unicorn. Unfortunately it was raining and I had some second thoughts because last time I was in that alley some dude pulled a gun on me. So we decided to chat backstage instead, ‘cause we’re mighty cool and it was the only place you could hear… almost.

ONLY: Am I the only one that’s digging the JLo vibe outside? Laser lights? Hope we don’t go blind!

Daniel: It’s definitely better than standing at the light switch and turning it on and off really fast!

ONLY: What are your feelings on revival of flannel?

Daniel: I’m not sure it ever went away. But there are so many better things we could be reviving from the grunge/‘90s look! Like the nose ring with a chain to the ear or doing the egg-beater-arm and saying “whoo-whoo-whoo” ya know?

Andrea: I want a rubber sweater.

ONLY: How many times has Christopher Vincent (formerly of Cheerleader Camp) asked you out?

ONLY: So Daniel, I hear the stage at Pub 340 isn’t big enough for you.

Daniel: Yeah, it’s rather small, I bump my head on it a lot because I’m too big. I like to move a lot when I drum

ONLY: How are things going with that Emergency Room compilation and your 7”?

Daniel: Well the ER comp has 7 bands I think, we have three songs. The 12” comes out with a bound photo-book of bands at the ER and people and stuff, it should be out soon… but I couldn’t really say when. Our 7” will be out in April, it’s being released on Isolated Now.

ONLY: How do you come up with your lyrics? I especially like “Hydrogen Jukebox”.

Andrea: It’s our only love song about S&M.

Daniel: We’ve got two new songs though! There’s “Peter Trip” which is about a DJ who went to New York and stayed up for a week and went…

Andrea: He stayed up a week and got sleep deprivation psychosis.

ONLY: Any background on that guy?

ONLY: How are the other projects, such as Passions coming along?

Daniel: I’m in Passions with Jesse and Dan, my solo-project is Adult Books. There’s Invisible Control Pantine which is me and my boyfriend Nic from Shearing Pinx. Andrea, Nic, Legs and I are starting a band called Big Trouble as well. Andrea, Andrea, tell her your other bands!

Daniel: Mom Jeans with a Z.

ONLY: What local (or not) musicians/people influence your music.

Daniel: There are lots of people locally doing great stuff for the music scene. My boyfriend Nic has a label called Isolated Now Waves, which has over 170 releases last time I checked. And Jordan (from Twin Crystals) runs a recording studio at the ER. There are also so many local bands doing the DIY thing and putting stuff out. I personally have a soft spot for Modern Creatures and Nic’s band Shearing Pinx.

Andrea: With all sincerity: The Twilight Zone. I spend enough time as it is moping and complaining, so when it comes to music or art or anything else I try and say something else. That something else just happens to be based on pretty vague urban myths and 1 or 2 chords played fast.

ONLY: So you’re enjoying being a band in Vancouver, incest or none?

Andrea: We all change our shoes at shows.

ONLY: Who’s feet are the biggest?

Nu Sensae play at the Peanut Gallery on February 16th