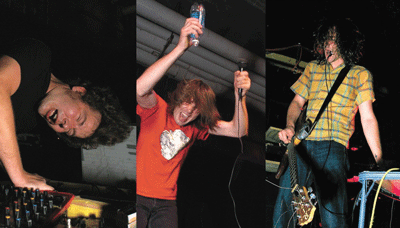 Now that Burned Mind is finally out on vinyl (Wolf Eyes blame the delay on their own personal malfunctions and general “unsmartness”) you can own the record at the top of the perceived noise music charts. Aaron Dilloway took off to Nepal (while his wife works on her PhD in Nepalese sign language) and the W.E. line up thus changes again, adding Mike Connelly from Hair Police. If noise is the new post-punk and Wolf Eyes is the new Howlin’ Wolf, what does that make you? Even with the jumbo Sub Pop releases, Gods of Tundra and American Tapes are still adding to the enormous discography of tiny releases.

ONLY: What happens when you join Wolf Eyes? Did you actually have to learn all Aaron’s parts or what?

Mike Connelly: Yeah, sure. I mean, we went over the older tunes and I’d work on my part and try to stay true to the song but also just do my own thing too.

ONLY: You’re going to Brazil soon. Do they love you there?

M: I have no idea. I never talked to anyone in Brazil. So we have no idea. We’re really excited. We’re playing one night and then we’re doing a lecture the next night.

ONLY: A lecture? At a university or something?

M: I Guess. At our recent shows there’s been a lot of lecturing going on. John Olson likes to lecture the crowd. He likes to talk about what’s on his mind and stuff.

ONLY: What kind of shows does he like to watch?

M: Me and John are really into the Apprentice and we like Law and Order too.

ONLY: Law and Order is awesome.

ONLY: Isn’t that the show with that guy from the Commish?

Nate Young: I don’t like Canadian music. Don’t quote me on that.

ONLY: That’s cool. You guys are the ones on the same label as Hot Hot Heat.

ONLY: Is it weird to be on a label with Sleater-Kinney and shit like that?

ONLY: How is life on Sub Pop?

ONLY: Is it weird to be the new buzz band?

N: Uh, yeah. That is weird. The noise community is tape trading in a lot of respects. It’s more about that than it is about bands. I’m not really into communities, but I have to admit it’s a nice little community. There’s really creative, great things happening. I’m really not into communities. I’m more into families. You know, in communities there are cops running around. There’s no leader in a family.

ONLY: Who’s the patriarch in the Wolf Eyes family?

ONLY: Do you think it ever gets to the point that you’ve made the noisiest, loudest record you can and you’ve pushed all those boundaries…

J: No, We’re not really into pushing boundaries and that shit. We’re like Howlin’ Wolf, you know. Just doing our thing. We’re like retarded folk artists.

ONLY: What do you think the demise of Wolf Eyes will be? How will it end?

ONLY: But what’s going to happen when you’ve already clawed the inner ears of all your fans to the point that they can’t hear your records or shows anymore?

J: Well for every fan we’ve got four people that are trying to hunt us down and kill us, so eventually the equation is going to go the other way.

ONLY: Do you think those people will pay to get in to shows in order to get you?

J: They’re hunters, they’ll do anything.

Credit Check: Give my regards to Vanderhoof

Itâ€™s okay to be gay

It's a waste of resources to ticket DTES street vendors

Beat Kids: The Nights Get Long and Boring. 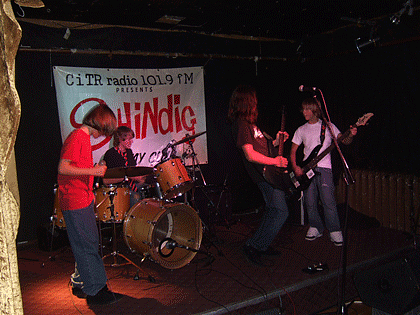 SHINDIG Round: One | Week: Six