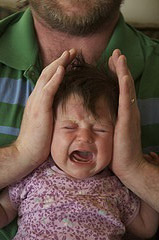 The longest hangover of my life is beginning to fade. At least it’s something like a hangover. The past couple of months have been restless, uneven and riddled with interrupted sleep, and like after one of those night of nights I’ve willingly given up, there are fond memories but you can’t seem to put much of a day together for the lack of dream time. But if I remember one thing from university it’s that someone, possibly a roommate, brought the sickly, painful morning hangover into stark focus by suggesting that hangovers are what allow us to know we are alive. Something about ‘through suffering comes renewed love of life.’ Granted, at the time I bet it was the beer and a smoke he offered me that helped me more than than this philosophical musing . Regardless this stoned out mantra has stuck with me somehow, and I think about it everytime I feel a hangover or fever recede. When my mind becomes mine again and I come back to the world.

But having a child is not exactly like a hangover. I’m not sick. I don’t hurt, there are no horrifying pictures of me doing terrible things and while there is a whole lot of puking and pissing and shitting, none of it is mine. In fact, the first few months of having a child are less like a hangover than feeling like you’ve been taking care of a degenerative 90 year-old alcoholic with Alzheimer’s. Instead these first couple of months have been a lesson in tolerance, sacrifice, adaptability and the power of any fifteen minutes alone. And now, something strange is happening. As my new baby begins to resemble something more like a human than a useless, wobbly necked boob guzzler, the memories of the last few weeks, of me being a frazzled automated caregiver are slipping from my mind, like the toxins of the best party ever after a really great, greasy breakfast.

In fact the changes now are daily, with her neck firming up, her curiosity grows as she begins to tilt her head this way and lilt her ear that way, and her smiles seem to come more from the heart than from her bowels. I can begin to see the real her. And she is hilarious. Not in a sense of humour kind of way but the simple humanity she is developing is fascinating. I spend hours staring at her, watching this momentary window to our primal past. She is living in 2009 but her developmental phase is somewhere near 150 000 BC. She grunts and “hoots” and “waaah’s” and “snorts”. She frantically waves her arms and is surprised and curious when new sounds or objects are introduced. She is the missing link to our past, caught in that transformative phase between cheeky monkey and early caveman. Everything is new and wondrous, like how those earliest first days must have been when we as a species stepped out of the mud, or climbed down from the trees and figured out that we could express, explain and explore. We have even established a primitive form of communication, she and I. I have a giant red monkey that I dangle over the side of her crib and with its long arms I bonk its head and make “unga bunga” noises. She totally gets this. It makes sense. It’s a completely useless and simple motor function experience that has no other weight of expression other than “hey…me too.” It’s the earliest form of community bonding. “Me too” is the communicative bond that probably helped forge the first friendships, which in turn led to the first cave communities. Like when one cavemen met another caveman and “unga bunga’ed” about being chased by a saber tooth tiger and the other caveman unga bung’ed back; “Me too.” And as she grows, every day, passing through centuries of human development we are bonded by the shared experiences of that simple “unga bunga” moment. While her first snorts and rooting sounds were basic signals of either hunger or displeasure, now her grunts aren’t even always about food. She “unghs” when she wants me to spin the mobile clockwise, she goes into a panic if it goes counterclockwise. She “coos” when she moves a toy with her hand and she “oohoohs” when sees the cat -like it might be food in a few more weeks, right after she discovers fire. DONT EAT THIS. Ox penises, you guys, are not food.

Writing about hip-hop being dead is dead