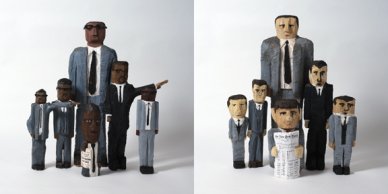 I’m not sure if it is something in the water all the curators and programmers drink, but like we’ve encountered other weeks, this week everything seems to follow a singular theme. The theme: get educated. Apparently the local epidemic of people talking out of their asses has come to the attention of the higher ups, so they’ve dedicated this week to fixing that. The problem is so rampant that I doubt the heavy roster of artist talks will eradicate this phenomenon, but it may shut up a few pretentious fuckers who run around spouting massive generalizations and poorly constructed arguments (and I’d probably have to include myself in this category from time to time). Anyways, the point is they’re on to us, so get out your notepad because I’ve got a dense list of events to attend.

First stop that is absolutely necessary to attend on this voyage to intellectual integrity is the UBC Art History Graduate Symposium, “Obsolete Concepts: Formative Lingerings”. This 2-day symposium starts today with lectures from Josh Cohen, Grace Johnstone and Regis Michel from 5-8pm followed by lectures on Saturday from 10am-5pm by Meghan Lowe, Abigail Susik, Paul Sutton, Anja Bock, Carla Benzan and Srimoyee Mitra. The dense line-up of talks have titles that range from Susik’s “Cities of Yesterday: Surrealism and the Harnessing of the Outmoded” to Sutton’s “Justice in Aesthetics/Aesthetics in Justice: what happens when ‘the beautiful’ and ‘the public sphere’ converge”. Boom. This mind bend all happens in Room 102 of the Lasserre Building (6333 Memorial Rd). I’m going to bring a pen (and hopefully a brain too).

If your mind hasn’t melted and you aren’t at academic capacity, then if you rush after the Friday’s lectures, you can make it to Artspeak to hear John Atkin, Mari Fujita and Meredith Quatermain speak at 8pm. The lecture series, “Speakeasy: Frontierism” confronts ideas surrounding Vancouver’s boomtown legacy and it’s unchecked urbanization. This is a very contemporary concern for Vancouver and I’m sure has sprung up in conversation on many an occasion, so this may be an important lecture to take notes at, especially for those half-drunk-semi-articulate-dinner-party-arguments (which I highly suggest you partake in after this insane day of mind expansion).

If on Saturday you just can’t sit through another spoken word, then I suggest cutting out of the UBC lectures early at 3pm to attend Robert Morris‘s opening at SFU called “The Birthday Boy” which is on until 5pm. Just don’t feel tricked when you arrive to a “dual-screen projection showing two simultaneous, 35-minute lectures on David, given by two ‘art historians’ — one male, one female.” If it’s any consolation though, you don’t have to sit and the lectures are in Italian with English subtitles. This exhibition also comes with a 1000 word essay written by Bill Jefferies and 3 lunchtime talks on Tues (12:35pm), Wed (12:35pm) and Thurs (12:05pm). Seriously, not one of us is getting off lightly. They are on to us.

There is another very viable, and interesting option for Saturday that I would suggest going to if any of these lectures are just WAY out of your league. It’s an artist tour starting at 2pm at the Richmond Art Gallery of Dan Starling‘s “Malcolm X / J.D. Salinger” and Charlene Vicker‘s “Brown Skin Before Red” exhibitions. There is still learning involved, but it involves physical movement (thank fucking whoever). it couldn't happen to me... could it?

More than ten things that I hate about you

Where does the working class party go from here?

A Brief History Of The Nipple